GoNewsOn – Anytime Anywhere
Home Entertainment Yami Gautam: Mom’s saree to Pahaadi nath
Share
Facebook
Twitter
Pinterest
WhatsApp
Linkedin
Rate this post
Yami Gautam tied the knot with Aditya Dhar on June 4, in a dreamy marriage. The couple’s intimate wedding pictures have left netizens in awe. Revealing details about Yami’s wedding, a source revealed, “Yami truly made for the prettiest bride. It was everything that Yami wished for it to be – simple, intimate & radiating pure love. She always dreamt of having a very intimate wedding ceremony and it seems like that is exactly what she manifested. Due to the ongoing pandemic in the country, the couple decided to opt for a low-key wedding with only their respective families present on their special day.” Here’s decoding Yami Gautam’s complete bridal look. 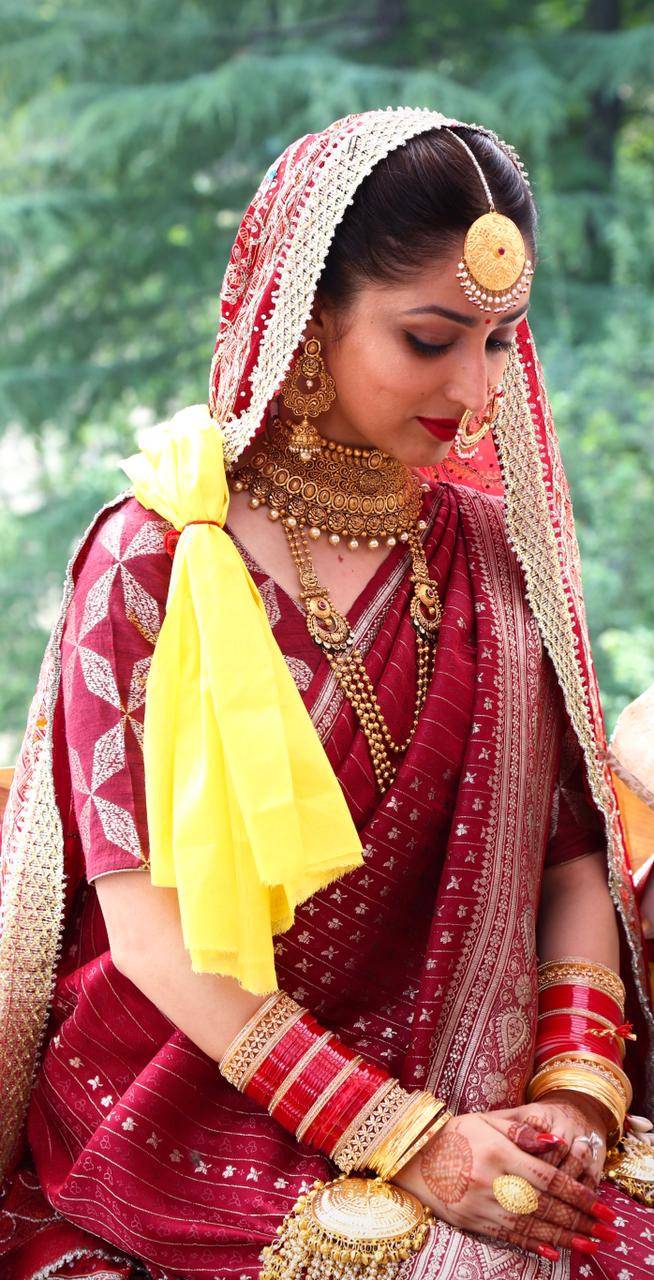 Yami wore the traditional Pahaadi – Himachali Nath, gifted by her grandmother
Yami Gautam’s wedding attire featured several precious gifts by her grandparents. The actress layered her bridal saree with a matching dupatta which was especially gifted to her by her maternal grandmother (naani). Even though Yami’s grandmother couldn’t be a part of the wedding celebrations, she sent her blessings to the beautiful couple. She also sported a beautiful traditional Pahaadi – Himachali Nath which was again gifted to her by her grandmother.

Yami Gautam’s bridal avatar had an emotional connect with her family as she was decked in Heirloom Jewelry. She completed her look with an antique regal gold choker set and maang tikka. The bride wore exquisite kalire which were decorated with cowries & coconut. 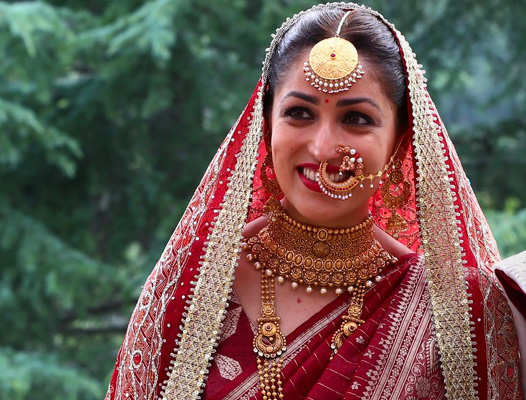 Yami Gautam opted for subtle make-up
Yami Gautam chose to do her own makeup and decided to go minimal. She accentuated her bridal look with simple black khol and red lips with some soft blush made her look timeless and classic. Interestingly, Yami’s hair was done by her doting sister Surilie Gautam.