GoNewsOn – Anytime Anywhere
Home Entertainment When a fan asked Ileana D’Cruz how he should deal with his...
Share
Facebook
Twitter
Pinterest
WhatsApp
Linkedin
Rate this post
Ileana D’Cruz not only treats her fans with her stunning pictures on Instagram but also often interacts with them where she gives some delightful, helpful and quirky answers to their questions.

Last year, a fan sought Ileana’s expert advice on dealing with his fiancé during her periods and her prompt reply is sure to make you laugh till your stomach aches! 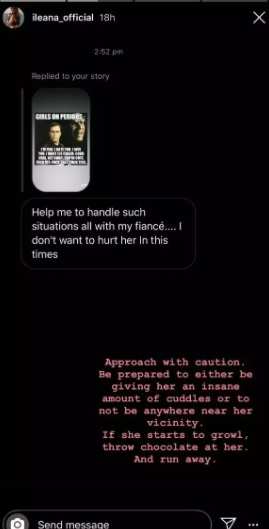 Sharing a meme that depicted women’s mood swings during periods, a guy asked Ileana, ‘help me to handle such situations all with my fiance… I don’t want to hurt her at this time,’

Ileana replied by saying, ‘Approach with caution. Be prepared to either be giving her an insane amount of cuddles or not be anywhere near her vicinity. If she starts to growl, throw chocolate at her. And run away’.

Ileana is quite active on social media where she commands a huge fan following. She shares stunning pictures and videos of herself with her fans and they just cannot have enough of the gorgeous actress.

On the work front, Ileana will next be seen in ‘Unfair And Lovely’ co-starring Randeep Hooda in the lead role. The film is based in Haryana and is on the obsession of our country with fair skin and the problems that a dusky girl faces.