GoNewsOn – Anytime Anywhere
Home Entertainment Vicky Kaushal wishes ‘champ’ Ranveer Singh on his birthday
Share
Facebook
Twitter
Pinterest
WhatsApp
Linkedin
Rate this post
y kUSActor Vicky Kaushal surely knows how to balance work and personal life. While he continues to juggle a busy shooting schedule, today he made sure to drop a birthday wish to his friend and actor Ranveer Singh who turned a year older before kickstarting the day at work.

Vicky took to his Instagram story and shared a picture of Ranveer to extend best wishes to the ‘champ’. He wrote, “Happy Birthday champ.” 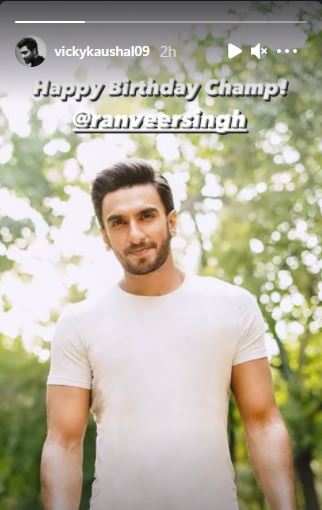 Apart from this, Vicky has also dropped a stunning selfie of himself from his car while he was on his way to the sets of his upcoming project. In the carfie, sunkissed Vicky is seen sporting a face mask that seems to be colour coordinated with his outfit.

Dropping hints about what is currently working on, he captioned it with lots of emojis that read, “☀️😷🚘🎥🎬🤙🏽”. Have a look:

Earlier, Vicky had announced on social media that he has started prepping for his role in the next superhero film ‘The Immortal Ashwatthama’ helmed by Yami Gautam’s husband and director Aditya Dhar.

Vicky shared a sneak-peek of Aditya’s ‘serious casting’ where he was seen covered in a white cast while the director was standing behind holding up a peace sign for the lens. The actor captioned it, “When the Director’s really serious about ‘casting’ you in the Film. Prepping to be The Immortal! @adityadharfilms #TheImmortalAshwatthama’.

Apart from this, Vicky has two biopics lined up in his pipeline, including Shoojit Sircar’s ‘Sardar Udham Singh’ and Meghna Gulzar’s ‘Sam Manekshaw’.

My Hero Academia Chapter 316 Release Date and Time, Countdown, When...