GoNewsOn – Anytime Anywhere
Home Entertainment Vicky Kaushal shares a glimpse of his intense training session as he...
Share
Facebook
Twitter
Pinterest
WhatsApp
Linkedin
Rate this post
Vicky Kaushal who has multiple interesting films in his kitty, is now likely to resume work soon. The actor is currently preparing for his upcoming project and even shared a glimpse of his gruelling gym session today.

He took to his Instagram story and share monochrome videos of himself where he is seen weightlifting with his gym trainer in the background. Have a look: 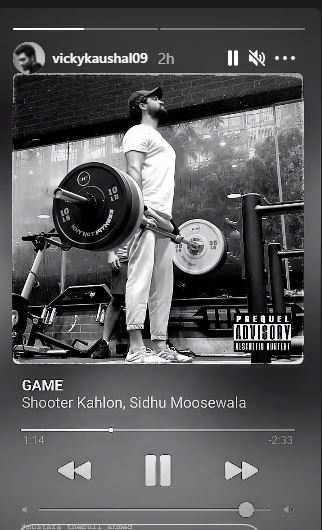 On Wednesday, Vicky had shared a selfie from a salon where he was getting a new haircut. In the picture, he was striking a pose by winking for the lens during his makeover session. It read, “‘“Baal mat kato… Arreeeyyy!!!” #iykyk’.

Soon after he shared the post, the caption reminded people of a viral video of a kid named Anushrut.

Apart from the acting profession, Vicky is also making headlines ever since Harshvarrdhan Kapoor confirmed Vicky’s relationship with Katrina. During a chat show with Zoom, Harsh was asked about an industry relationship rumour that he believes is true or a PR move. To this, he replied, “Vicky and Katrina are together, that’s true” and quickly added, “Am I going to get in trouble for it?”

Meanwhile, Katrina and Vicky are yet to make their relationship official.

On the work front, Vicky will next be seen in ‘The Immortal Ashwathama’ that will be helmed by Yami Gautam’s husband and director Aditya Dhar. He also has ‘Sardar Udham Singh’ and a highly-anticipated biopic on Sam Manekshaw in his pipeline.

The actor is also a part of Karan Johar’s multi-starrer ‘Takht’ where he will be sharing the screen with Kareena Kapoor, Ranveer Singh, Janhvi Kapoor, Bhumi Pednekar and more.