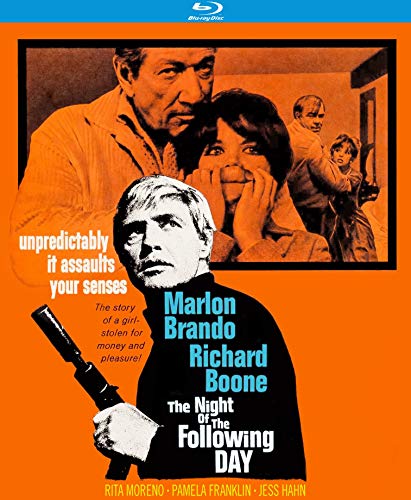 The Higher the Stakes, the Higher the Terror! Screen greats Marlon Brando (On the Waterfront) and Richard Boone (The War Lord) star in this taut psychological thriller that examines the darkest impulses of the human psyche. A gang of four professional criminals brazenly kidnaps a wealthy teenage girl (Pamela Franklin, The Innocents) from an airport in Paris in a meticulous plan to extort money from the girl’s father. Holding her prisoner in an isolated beach house, the gang’s scheme runs perfectly until their personal demons surface and lead to a series of betrayals that culminate in a furious and explosive climax. The film that Time called “a keenly conducted seminar in the poetics of psychological terror” is a must-see for Brando fans. Co-written, produced and directed by Hubert Cornfield (Pressure Point) and co-starring Rita Moreno (West Side Story), Jess Hahn (Bad Man’s River) and Al Lettieri (Mr. Majestyk).