GoNewsOn – Anytime Anywhere
Home Entertainment Suhana Khan’s childhood picture with Shah Rukh Khan and Gauri goes viral...
Share
Facebook
Twitter
Pinterest
WhatsApp
Linkedin
Rate this post
Shah Rukh Khan’s daughter Suhana Khan is all grown up today and is ruling social media. However, she wasn’t always like that. If you saw Suhana during her growing up years, you would be surprised to see her as a coy little girl who shied away from the media.

Speaking of which, today we got our hands on a throwback picture of the star daughter from her childhood days where she is seen attending an event with her parents. The lovely picture was shared by one of SRK’s fan clubs. 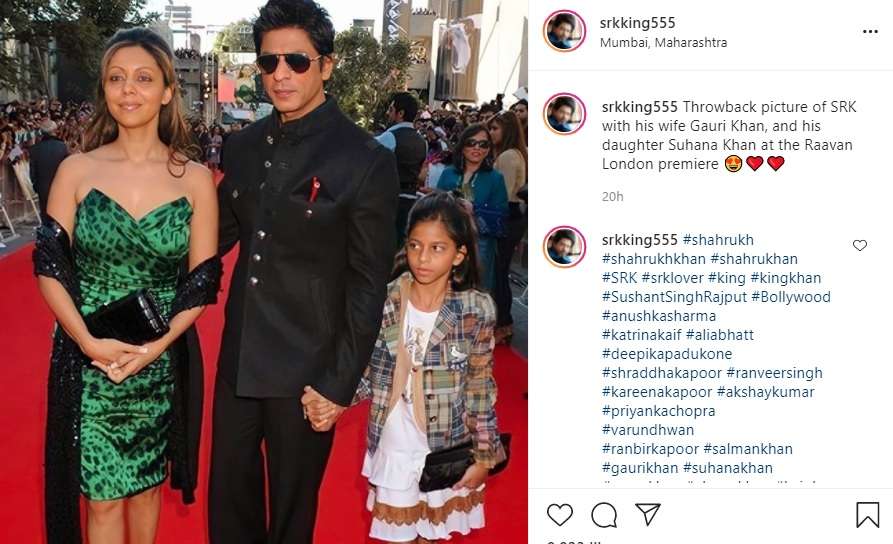 The trio had attended the London premiere of ‘Raavan’. While Gauri stunned in a green and black animal printed strapless dress, Shah Rukh looked dapper in an all-black suit. Baby Suhana, on the other hand, looked pretty as a peach in her white dress with a checkered jacket. The trio posed on the red carpet for the camera.

Directed by Mani Ratnam, ‘Raavan’ starred Abhishek and Aishwarya Rai Bachchan in lead roles. The movie received positive reviews from the audience and the critics alike.

Meanwhile, Suhana is currently completing her studies in New York. The diva aspires to be an actor like her father. While various news about her impending film debut have been doing the rounds on social media, nothing has been officially announced.

On the work front, Shah Rukh Khan will next be seen in Siddharth Anand’s ‘Pathan’ co-starring Deepika Padukone and John Abraham in lead roles.