GoNewsOn – Anytime Anywhere
Home Entertainment Shah Rukh Khan’s son Aryan Khan’s picture from his graduation ceremony goes...
Share
Facebook
Twitter
Pinterest
WhatsApp
Linkedin
Rate this post
Shah Rukh Khan and Gauri Khan’s eldest son, Aryan Khan is one of the most loved star kids in town. Every time he steps out in the city or his pictures are shared on social media, fans just can’t stop gushing over him. Recently, a picture of Aryan Khan went viral on the internet where he can be seen attending his graduation ceremony.

The star kid was studying the art of filmmaking and he graduated from USC. In the picture, we can see Aryan sporting his graduation robe with his hair set up properly. It reads, “Aryan Shah Rukh Khan. Class of 2020. Bachelor of fine arts, cinematic arts, film and television production school of cinematic arts.” Have a look: 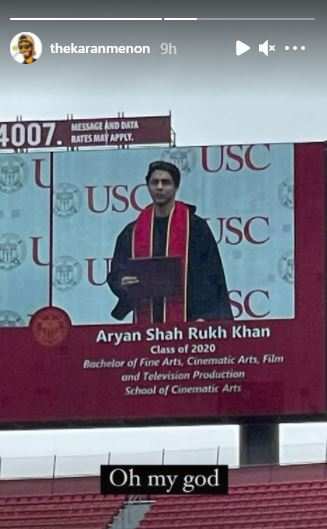 Aryan is not willing to follow his father’s footsteps by featuring in films. In an interview, SRK had once revealed that Aryan wants to become a director as he doesn’t want to be compared to his father. While his daughter Suhana Khan is all set to make her debut after she completes her education.

Meanwhile, on the work front, Shah Rukh will next be seen in Siddharth Anand’s ‘Pathan’. The film will also star Deepika Padukone and John Abraham in the lead roles. It will also have a special cameo by Salman Khan.