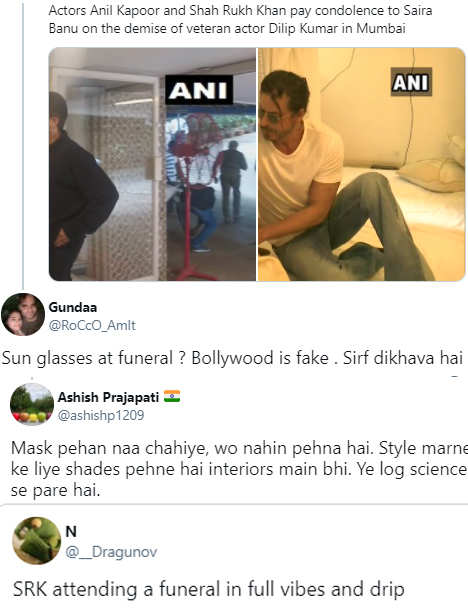 Several other internet users also defended the actor and praised his gesture of visiting the bereaved Saira Banu and consoling her. An internet user also shared a picture of SRK without his sunglasses, speaking to an inconsolable Saira Banu, while he held a mask in his hand. Shah Rukh Khan was very close to Dilip Kumar and Saira Banu. Known as their ‘mooh-bola beta’, SRK often visited the veteran couple. Dilip Kumar passed away due to prolonged illness at 7.30 am on July 7. He was laid to rest with full state honours at Juhu Qabrastan around 5pm on Wednesday. Amitabh and Abhishek Bachchan paid their last respects to the 98-year-old thespian at the Juhu Qabrastan. Born as Mohammed Yusuf Khan, Dilip Kumar travelled to India with his family, leaving behind their ancestral haveli in Peshawar. He debuted on the big screen debut with ‘Jwar Bhata’ in 1944. In his glorious career spanning decades, the acting legend left behind a plethora of memorable performances like ‘Jugnu’, ‘Devdas’, ‘Mughal-e-Azam’ , ‘Naya Daur’, ‘Ram Aur Shyam’ and ‘Deedar’ to name a few.