GoNewsOn – Anytime Anywhere
Home Entertainment Sara Ali Khan has the sweetest birthday wish for Aanand L Rai,...
Share
Facebook
Twitter
Pinterest
WhatsApp
Linkedin
Rate this post
Sara Ali Khan shared a lovely throwback picture with filmmaker Aanand L Rai to wish him on his birthday. The actress also thanked him for reminding her what passion is and showing her what love is. 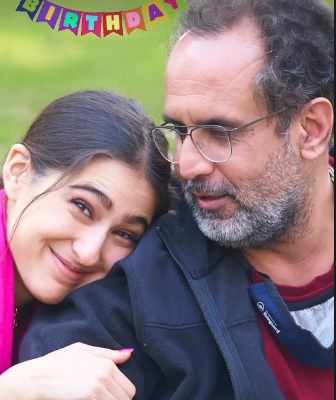 Sara is seen smiling sweetly as she rested her head on Rai’s shoulder. This picture of the duo from the sets of their upcoming film is simply too sweet for words. Along with the photo, she wrote, ‘@aanandlrai sir!! Thank you for reminding me what passion is and showing me what love is. Missing you sir’

Sara and Rai have collaborated for the first time for their upcoming film, ‘Atrangi Re’. The movie will also star Akshay Kumar and Dhanush in lead roles. The movie was supposed to hit the theatres on February 14, 2021.

This is the first time that Sara will be seen sharing the screen space with Akshay and Dhanush in the film. The announcement pictures of the trio have got all their fans super excited for the movie.

Meanwhile, Sara also has Aditya Dhar’s ‘The Immortal Aswatthama’ in her kitty. The movie will also star Vicky Kaushal in the lead role. No further detail about the movie has been revealed by the makers as of now.

Who is Tushaan Bhindi? Here’s all you need to know about...