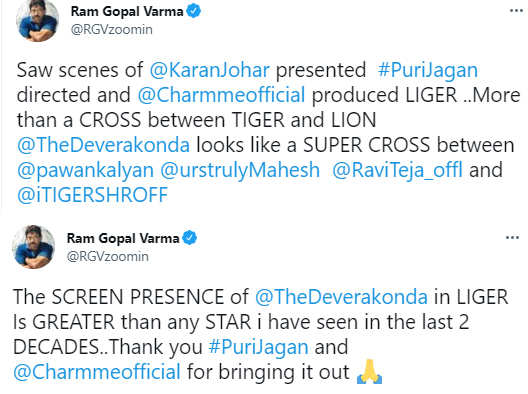 The filmmaker went on to thank director Puri Jagannadh for presenting Vijay Deverankonda in sucha grand manner. RGV added, “The SCREEN PRESENCE of @TheDeverakonda in LIGER Is GREATER than any STAR i have seen in the last 2 DECADES..Thank you #PuriJagan and @Charmmeofficial for bringing it out.”

When Vijay was asked if he was happy they way ‘Liger’ was being planned as his debut in Bollywood, the actor had told ETimes, “I’m not someone who works on plans. As soon as I heard the script, the story, I wanted it to be a part of it. And it made sense to make a pan-India movie because it was a story that I feel the country will enjoy watching. I felt ready for it hence we scaled it up. Everyone was on board and we set it up that way. But it was not an intentional plan to enter Bollywood. ‘Liger’ is just something that happened.”. Speaking about his co-star, the actor had stated, “Ananya is lovely! She works hard and does a really good job. She’s a fun co-star.”