GoNewsOn – Anytime Anywhere
Home Entertainment KRK showers praise on Vivek Oberoi amid his legal battle with Salman...
Share
Facebook
Twitter
Pinterest
WhatsApp
Linkedin
Rate this post
Kamaal R Khan is entangled in a legal battle with Salman Khan and while he has been asked not to post anything about the actor, KRK is giving a shout out to several other actors of Bollywood. The actor-critic showered praise on Vivek Oberoi for his recent interview and his appreciation post read, “Bhai @vivekoberoi your interview is brilliant and pure truth. Keep it up!” This post came soon after Vivek shared in an interview that the film industry has a good side but at the same time everyone refuses to acknowledge the bad side. 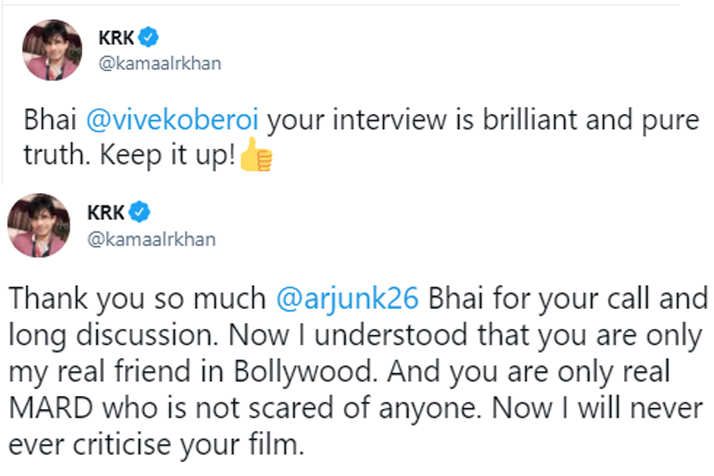 Before Vivek Oberoi, KRK had penned a post about Arjun Kapoor, claiming that they had a long discussion. “Thank you so much @arjunk26 Bhai for your call and long discussion. Now I understood that you are only my real friend in Bollywood. And you are only real MARD who is not scared of anyone. Now I will never ever criticise your film.”

Kamaal R Khan’s tweets against Salman Khan had landed him in a legal trouble with the ‘Radhe’ actor slamming him with a defamation suit for his derogatory comments. In a statement, Salman’s team had shared details about the legal case, “The suit has been filed as the Defendant (KRK) has been publishing and endorsing defamatory allegations, including that Mr. Salman Khan is corrupt, that he and his brand “Being Human” are involved in fraud, manipulation and money laundering transactions, that he and Salman Khan Films are dacoits. The Defendant has been spreading malicious falsehoods and defaming Mr. Salman Khan consistently over several months, clearly with a view to draw attention to himself.” Following this, Salman Khan also filed an application demanding that contempt action be initiated against Kamaal R Khan as he continues to make defamatory remarks despite an undertaking not to do so. Kamaal R Khan’s advocate told the court that his client would not make any further defamatory posts or remarks against Salman till the next date of hearing.