The star looks gorgeous in a red saree with a veil that came with a golden border. Her husband opted for an off-shite sherwani set. As soon as she shared the post, Vicky and Katrina dropped heart emoticons in the comments section. Adah Sharma, Soha Ali Khan, Gajraj Rao, Sharvari, Neha Dhupia, Maanvi Gagroo, Gauahar Khan, Sumeet Vyas, Harleen Sethi, among others also dropped love in the comments section. 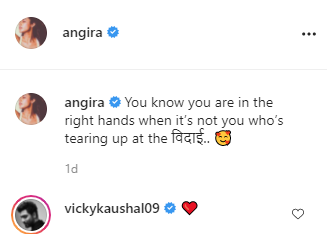 The post was captioned as, ”On 30-04-2021 Anand and I sealed our friendship into a marriage in the presence of our family, closest friends and god as our witness. With life slowly unlocking around us.. we wanted to unlock this happiness with you! ❤️”.

She further added, ”You know you are in the right hands when it’s not you who’s tearing up at the विदाई.. 🥰”.

Check out her posts here:

On the work front, Vicky will be seen in an upcoming biopic on Sam Manekshaw. He also has the titular role in Shoojit Sircar’s biopic of Udham Singh, titled ‘Sardar Usham Singh’. He has been roped in for Karan Johar’s ambitious project, ‘Takht’.

Katrina is gearing up for the release of ‘Sooryavanshi’ opposite Akshay Kumar. She is also doing ‘Phone Bhoot’ with Siddhant Chaturvedi and Ishaan Khatter.

In a recent interaction with Zoom, when Harsh Varrdhan Kapoor was asked which industry relationship rumour he believes is true or a PR move? He replied, “Vicky and Katrina are together, that’s true” but quickly added, “Am I going to get in trouble for it?”

Who Is Mobius On ‘Loki’? 5 Things About Owen Wilson’s Character...

Mine Episode 15 Release Date and Time, Countdown, When Is It...