GoNewsOn – Anytime Anywhere
Home Entertainment Kartik Aaryan shares a glimpse of his reunion with ‘Sonu Ke Titu...
Share
Facebook
Twitter
Pinterest
WhatsApp
Linkedin
Rate this post
Kartik Aaryan has quite a few interesting projects lined up in his pipeline. While he has been juggling multiple shoots and keeping himself busy with work, recently he managed to sneak some time out and meet his friend and co-star Sunny Singh.

The two came together to catch up for a drive, after a long time and shared a glimpse of their reunion on social media. It’s Sunny who took to his social media and shared a priceless selfie of himself with Kartik where both were all smiles in their off-duty looks. 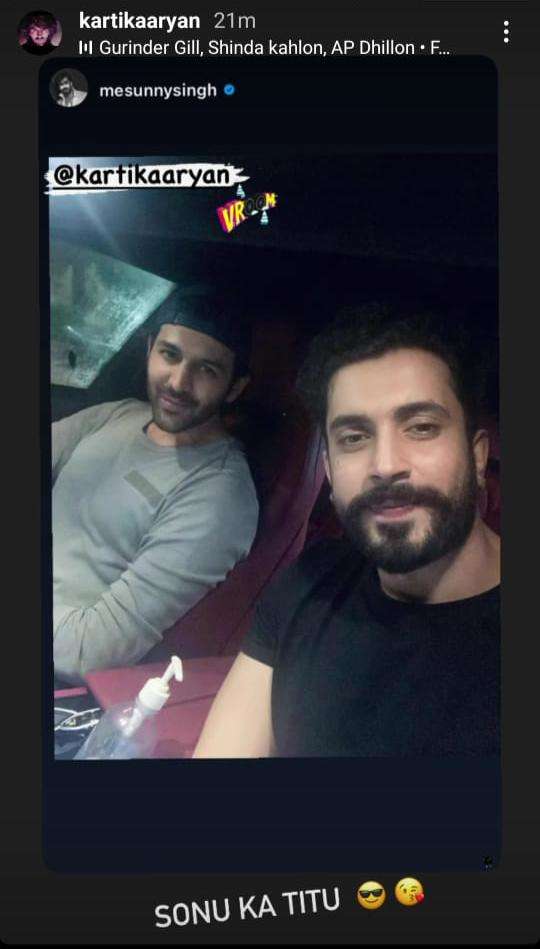 Kartik and Sunny’s friendship goes back a long time when they had starred together in ‘Pyaar ka Punchnama 2’ and then impressed fans with their bromance in ‘Sonu Ke Tittu Ki Sweety’ which clocked 3 years in 2021. Talking about Kartik, earlier Sunny had shared, “ur friendship and bonding is exactly like school friends. You move ahead in life making new friends, but that school friendship remains very special to you. Both of us began our career together because of Luv Ranjan sir, and our bond got stronger.”

Meanwhile, fans continue to wait for the actors to finally share an update on the possible sequels of ‘Pyaar Ka Punchnama’ and ‘Sonu Ke Titu Ki Sweety’. Earlier, Sunny had confirmed to a news portal that director Luv Ranjan has something in his mind with the popular duo, however, timelines are yet to be decided.

Apart from this, Sunny will be next seen as Lakshman in the Pan-India film, ‘Adipurush’, with Kriti Sanon, Prabhas and Saif Ali Khan in the lead. On the other hand, Kartik has ‘Dhamaka’ and ‘Bhool Bhulaiyaa 2’ in his kitty.

He was also roped in to play the lead in an upcoming musical saga by director Sameer Vidwans. While the film was initially titled ‘Satyanarayan Ki Katha’, now the makers have decided to change the name of the film to avoid hurting any sentiments.