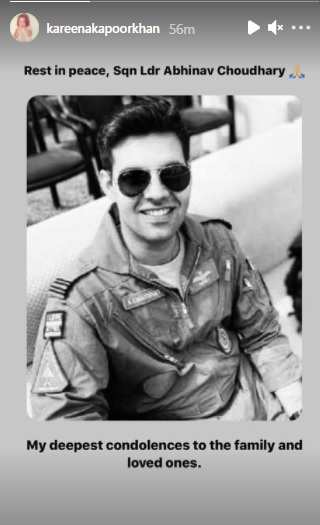 Sharing a monochrome picture of Abhinav, Kareena wrote, ‘Rest in peace, Sqn Ldr Abhinav Choudhary. My deepest condolences to the family and the loved ones.’

Abhinav Choudhary sustained fatal injuries after a MiG-21 aircraft crashed near Moga in Punjab in the wee hours of Friday.

IAF tweeted about the crash. “There was an aircraft accident last night involving a Bison aircraft of IAF in the western sector. The pilot, Sqn Ldr Abhinav Choudhary, sustained fatal injuries…IAF condoles the tragic loss and stands firmly with the bereaved family,” it said.

Meanwhile, on the work front, Kareena will next be seen in ‘Laal Singh Chaddha’ co-starring Aamir Khan. The actors have earlier worked together in ‘3 Idiots’ and ‘Talaash’. The film is an official remake of the Hollywood movie, ‘Forrest Gump’.