GoNewsOn – Anytime Anywhere
Home Entertainment International Yoga Day! Malaika Arora: Arhaan is obsessed with fitness and is...
Share
Facebook
Twitter
Pinterest
WhatsApp
Linkedin
Rate this post
Fitness isn’t Malaika Arora’s middle name but it might as well be. Her tryst with yoga began nearly a decade ago and now it is such an essential part of her life, that she refuses to let go of it even on days when she is holidaying. Ask her to name a favourite asana and the actress reveals, “I can do surya namaskars all day!” In fact, as soon as she recovered from Covid, the actress decided to start working out and received a great deal of support from her close friend and fellow yoga partner Sarvesh Shashi, who is a modern-day yoga guru himself. On the occasion of International Yoga Day, ETimes engaged in a tête-à-tête with Malaika, who shared her fitness secrets, while Sarvesh spilled the beans on their bond and Malaika’s enviable gym wardrobe! Excerpts:

When did you start practicing yoga and how difficult was it in the beginning?
I started about 8-9 years ago and it was very tough. A girl used to come home to teach me but slowly I started understanding, enjoying, and doing it regularly. And then, unfortunately, she went abroad, so I discontinued for a while. And, then again, I restarted. Sarvesh came into my life, and now he is somebody who really inspires me to be better at yoga and not give up! 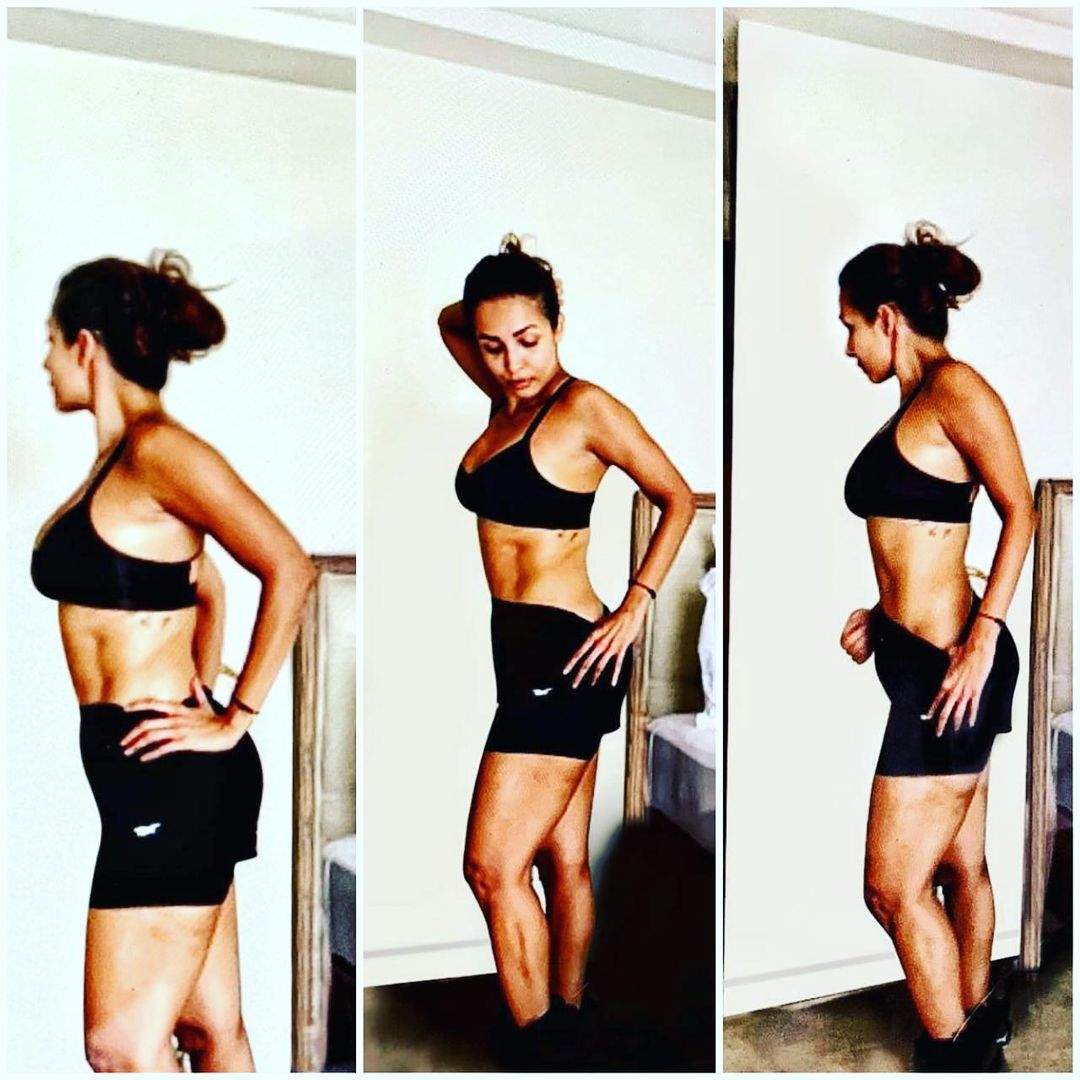 You recently revealed that your first workout post Covid recovery was brutal. What kept you motivated during the difficult time?
Malaika: Sarvesh kept me motivated. He really did push me a lot because he could see that I was struggling and we took it up as a challenge. And we thought let’s just do this together. I felt that no matter what I was doing, it was just not translating into anything because I was just not able to push myself the way I was used to. I would get his message at night before sleeping, saying, “I’ll see you morning” and then he would be down under my building, waiting, really pushing me.

Sarvesh: I will do that 365 days on a normal year in 366 times on a leap year. Interestingly, the only day I texted her, saying that I was feeling a little unwell, she messaged me in the evening, saying, ‘Tell me you tested positive’. I replied in the affirmative.

Malaika: Yeah because you’ve never gotten sick in the last six months, I have never missed a single day (laughs). 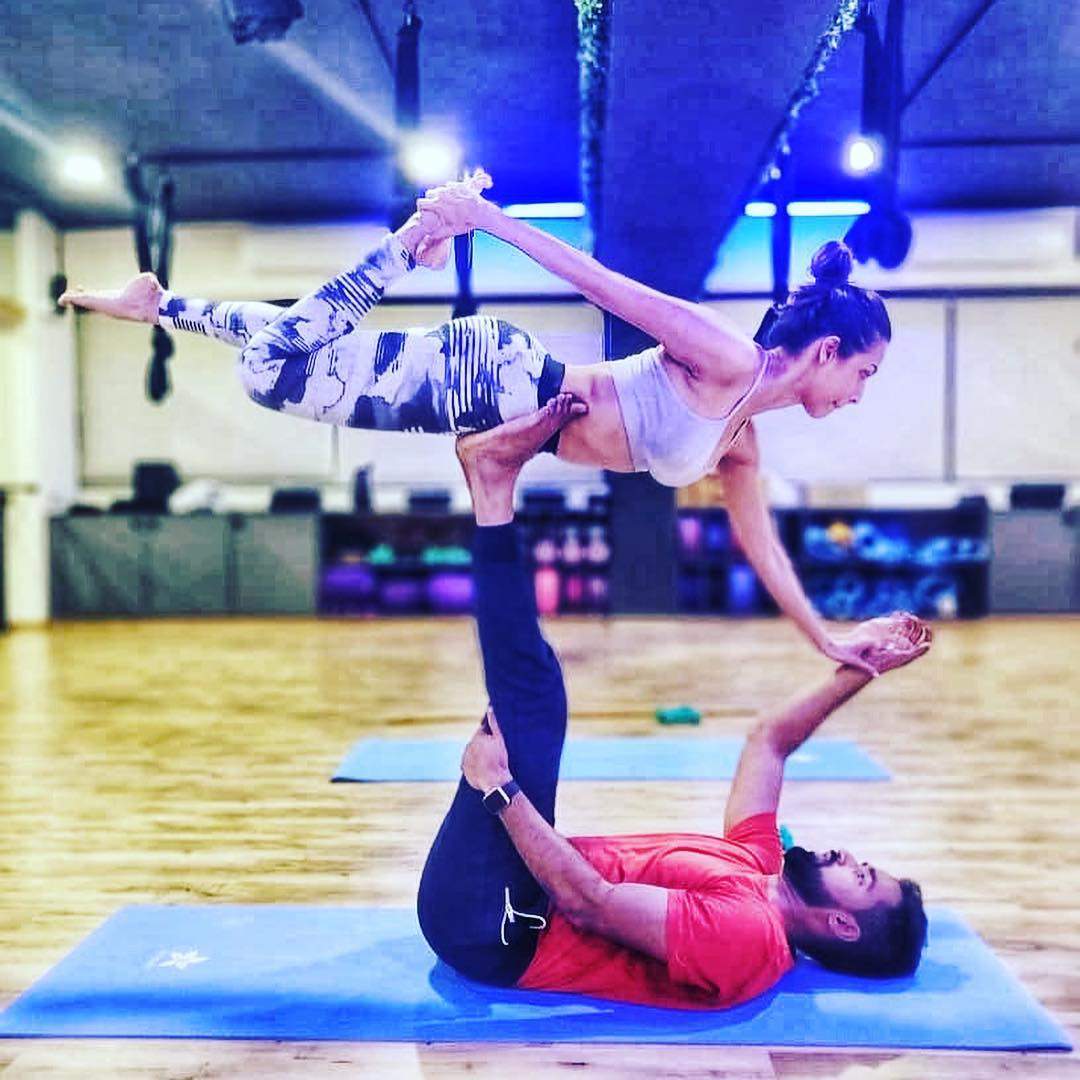 Sarvesh, you seem to be the driving force behind Malaika. How would you describe her passion for fitness?

Sarvesh: I would largely bucket three Ds that I keep telling people that one must learn from–dedication, discipline, and determination. She’s pretty much a personification of all three. A lot of people look at her and say she’s amazing, she’s got this amazing physique and a body, flexibility, and strength, but she works out seven days a week, twice a day! Nobody sees that. To not have biryani on Sundays too is very difficult, but she does that. She’s very, very consistent. A lot of people completely forget the word consistent while talking about hard work. I think that’s the missing piece, which she kind of fits into the puzzle.

You are not just a yoga inspiration but your gym looks are also extremely popular. But do you now feel pressured to keep up with it?
Sarvesh: Like I said, 365 days in a normal year and in a 366 on a leap year, Malaika will have a new pair of clothes and shoes in her home. Arhaan is already planning an e-commerce site with her shoes.

Malaika: No, not at all (laughs)… I am very good at mix-and-match!

Malaika, you have reversed the ageing process. Do you believe or practice
anti-aging yoga exercises?
I do face yoga, which is excellent for reversing aging. It really helps beautifully because the exercises that we do on our face yoga programs are designed specifically for that purpose. Of course, when you do yoga, there are certain asanas that help in restoring youthfulness and skin elasticity. So, coupled with a good diet, sleep and a good lifestyle, which are very, very essential, there are certain asanas that if you do every single day, which will make a world of a difference to your overall appearance. 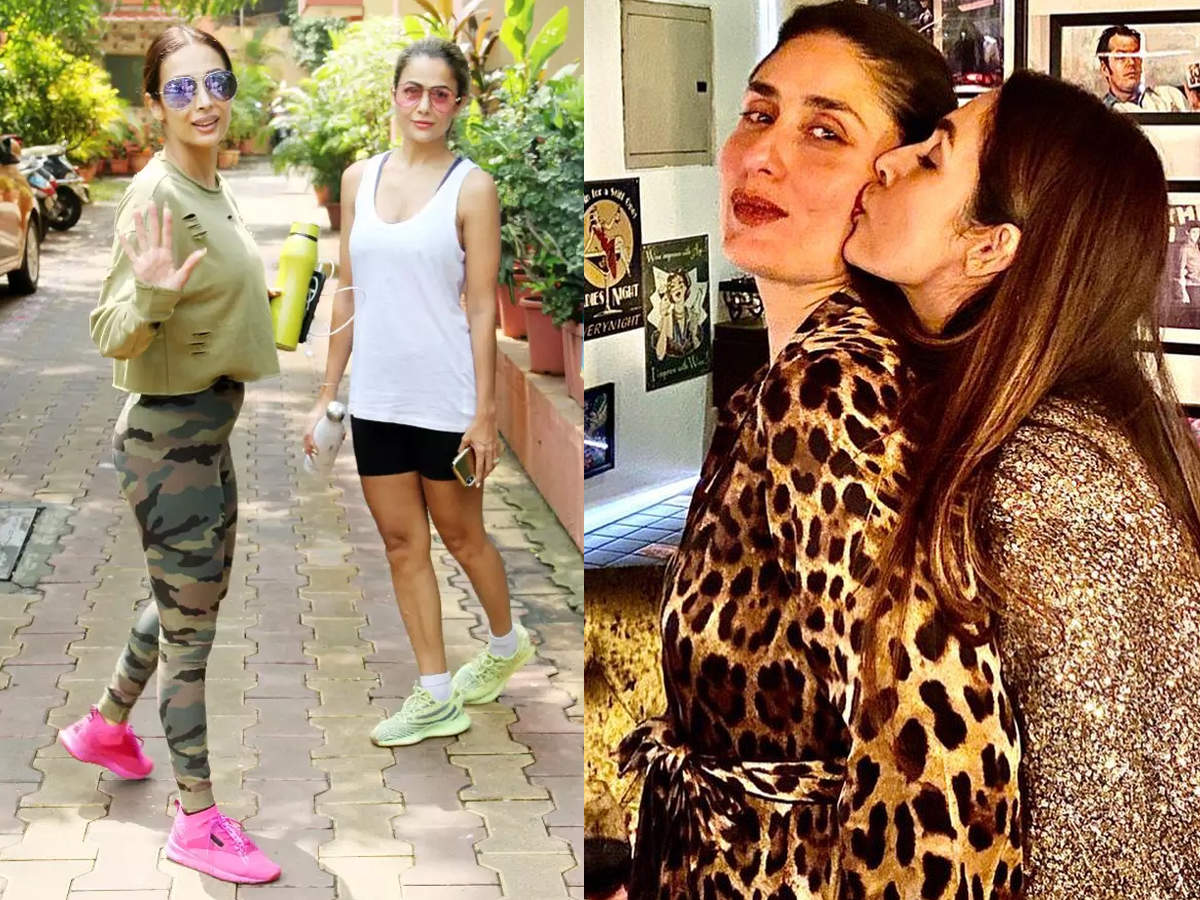 Your friend Kareena Kapoor Khan is also into yoga and recently Amrita Arora also put up a post about getting back into fitness. Do you all exchange fitness tips or have you ever worked out together?
Of course, we do, and that’s something that we all are very passionate about. We love food, workouts and fitness levels. So yes, these are things that we all discuss. We all motivate, push, and help each other out. So, for example, tomorrow, if my sister says I don’t have any company to workout, I’ll say no problem, I’ll come over and that goes with Bebo too. We all work out with each other, help each other. We give each other workout routines, diet, nutrition, etc.

When on a holiday, do you really take a break from your fitness routine?
I seldom do. Even when I’m traveling, I try to find classes where I can enroll and be part of. So, it is very rare that I completely not do anything. Otherwise, it’s just part and parcel of my life, where I have to be doing some yoga every day.

Malaika and Sarvesh, if you had to define fitness in one sentence, it would be…
Sarvesh: It is a lifestyle!

Malaika: You have borrowed this line from me, but it is okay! He says that it is a lifestyle, I think it’s a way of life. It’s your mental state of mind and it’s very important. Fitness doesn’t just mean your body, it also entails the mind. You’ve got to have a fit mind. So don’t just look at fitness as a body science, it should be a full holistic approach. 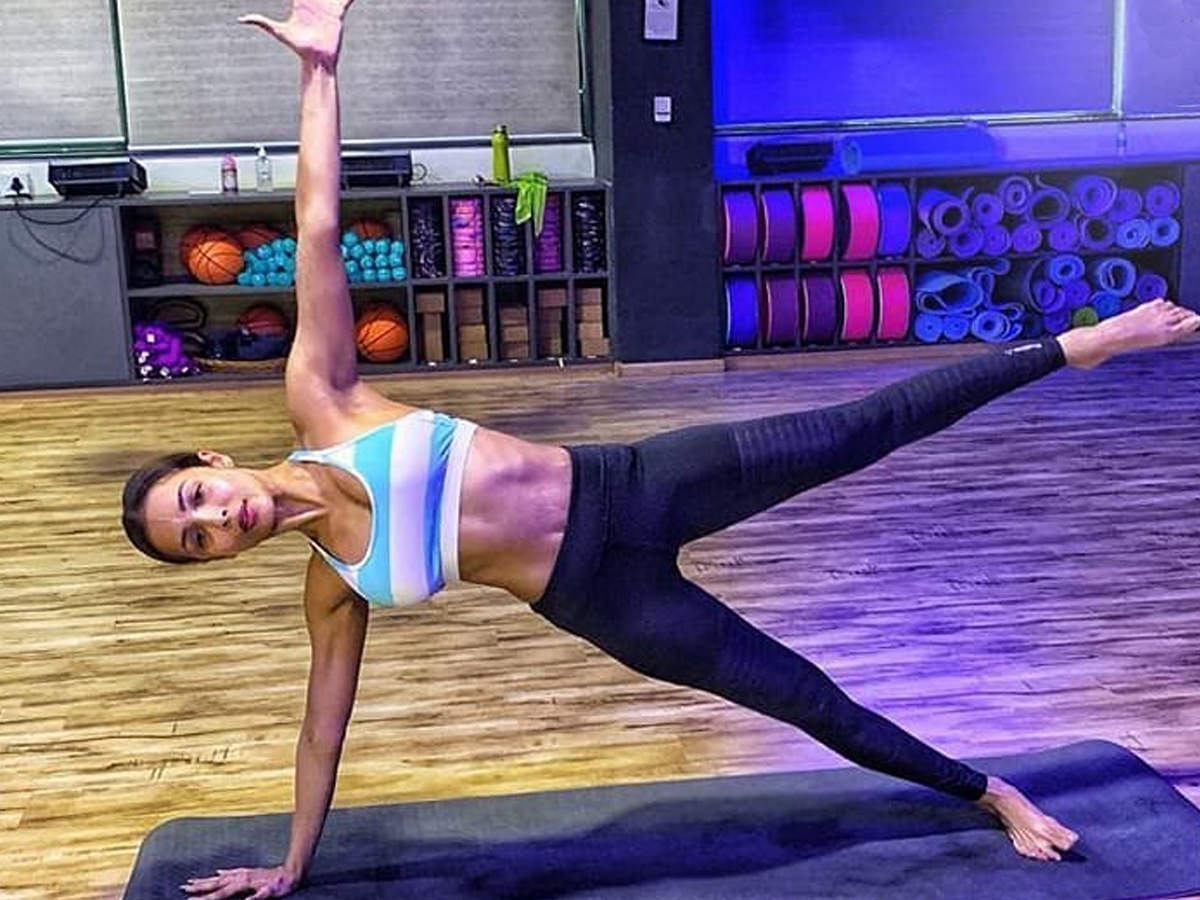 Malaika, what does your diet
comprise
of?

I am very particular about timings; that’s something which is important in your life as well. I’m somebody who follows a schedule, and sticks to a thing. For example, if I am out, only then I depart from my schedule. But otherwise, I follow a schedule every single day, which means I eat, wake up, and sleep on time. I fast in the morning, followed by three meals that I have. I’m very particular about following that routine, that’s why it’s called routine. And sometimes people get a little sick of routine, but a routine in your life is essential and it is very good. So what it does, for me, I think it’s a key to a well-balanced life.

You have inspired a generation of fitness enthusiasts, but is your son Arhaan inspired by you too?
Yes, he is also very much into fitness. See he’s at that age where he wants to go to the gym and build muscles. But he also knows the importance of yoga because I keep telling him every single day. So yes, now Arhaan is slowly incorporating it in his workout as well, because I’ve told him that he has to do a little bit of yoga because that’s what will keep his body supple and flexible. So, yes, yoga is very much part of his daily routine. He is also pretty obsessed with wanting to be fit, which I’m really glad about.

#BigInterview! Jugal Hansraj: I would have done a lot more work...