GoNewsOn – Anytime Anywhere
Home Entertainment Fans think Priyanka Chopra allegedly ignored Prince William and Kate Middleton at...
Share
Facebook
Twitter
Pinterest
WhatsApp
Linkedin
Rate this post
Priyanka Chopra made a glamorous appearance at the Wimbledon finals over the weekend and was accompanied by close friend and socialite Natasha Poonawalla. Her appearance was loved by fans but a few netizens pointed out that the actress allegedly ignored the Duke and Duchess of Cambridge, Kate Middleton and Prince William, when they arrived in the spectators’ box. While everyone applauded and welcomed the royal couple, Priyanka was seen chatting with her neighbour. A few internet users applauded PC’s act, concluding that the actress was supporting her friend Meghan Markle and Prince Harry, who have stepped down as working royals.

it’s Priyanka Chopra not applauding to the Prince’s arrival for me https://t.co/ZFDvw11F11 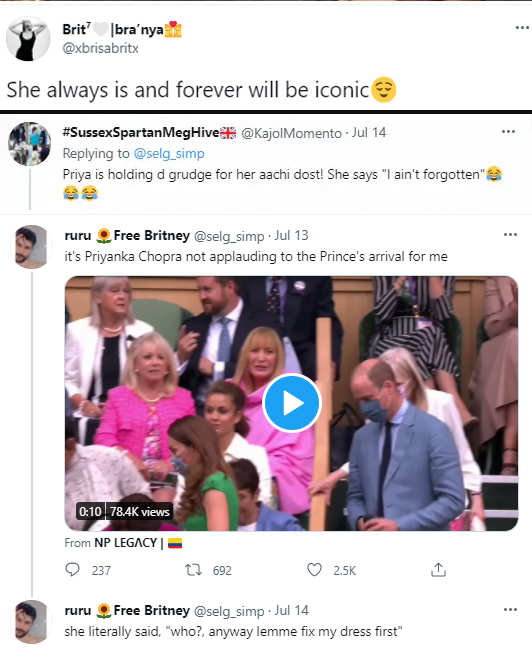 For the outing, Priyanka was dressed in a stylish white floral dress. Priyanka amped-up her OTTD with a high bun and a chic tan bag.

Recently, Parineeti Chopra joined her sister Priyanka in London. Parineeti took the first shot of the COVID-19 there and was snapped spending quality time with Priyanka Chopra in UK. Priyanka has been busy shooting for her multiple projects in London. Previously, she was shooting for a movie ‘Text For You’ Sam Heughan and recently she began work on ‘Citadel’, a web series that is being backed by the Russo Brothers of ‘Avengers’ fame. Apart from this, Priyanka will also be seen in Matrix 4 with Keanu Reeves.

Kim Talks Telling Her Kids About Him – Hollywood Life

Khushi Kapoor gets into her ‘power suit’ for her boss babe...