GoNewsOn – Anytime Anywhere
Home Entertainment Disappointed EXO fans slam SM Entertainment after they announce changes in the...
Share
Facebook
Twitter
Pinterest
WhatsApp
Linkedin
Rate this post
Fans of EXO were excited as the boy band announced their much awaited comeback with a special album, titled ‘Don’t Fight the Feeling’. However, the latest update about their upcoming album has not gone down well with a few netizens. Twitter user are slamming SM Entertainment they announced that EXO‘s album ‘Don’t Fight The Feeling’ will not have six covers but only one. 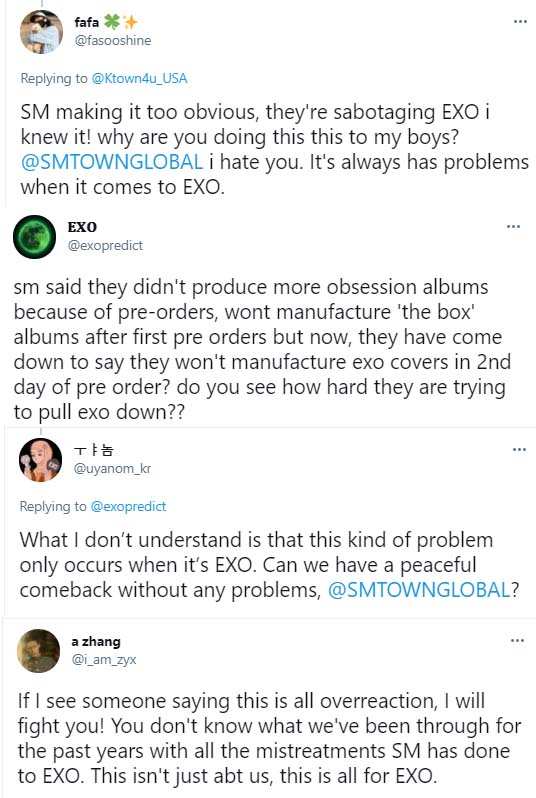 ‘Don’t Fight The Feeling’ will be the band’s first album in 18 months and when the grand announcement was made, fans were expecting two different photobook variations, with one model featuring six different covers that followers may purchase. However, as the pre-orders started on May 12, the Ok-Pop album provider OkTown4u tweeted that the cover for ‘Don’t Fight the Feeling’ has been changed from 6 versions to 1 version due to the manufacturer’s circumstances.

Fans of EXO also started tweeting with the hashtag #EXO_DESERVED_RESPECT, stating that SM Entertainment has disappointed the group more than once.

How To Play Multiplayer In Minecraft? Check It Out Here!