GoNewsOn – Anytime Anywhere
Home Entertainment BTS’ ‘Butter’ breaks another ‘Dynamite’ record; becomes fastest music video to cross...
Share
Facebook
Twitter
Pinterest
WhatsApp
Linkedin
Rate this post
BTS’ ‘Butter’ is sliding its way into the record books. The song that is the hot flavour of the summer, has hit a new milestone, in the first week of its release.

The song that dropped last Friday, has now become the fastest music video to cross the 200 million mark on YouTube. The band achieved this new milestone in just 4 days. With this, RM, V, Jin, J-Hope, SUGA, JungKook and Jimin beat the record they set with ‘Dynamite’ that reportedly achieved this feat in 4.5 days. 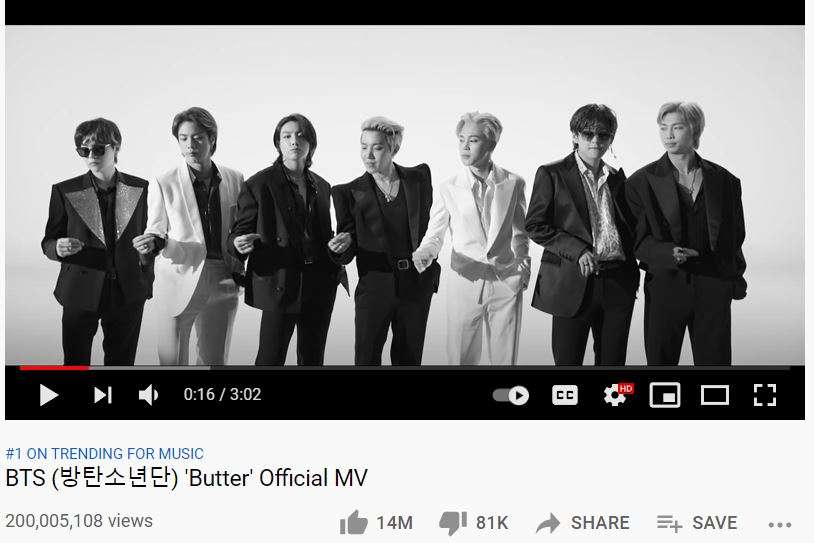 BTS now occupy 3 spots on the list of Fastest music videos to hit 200 million. Their song ‘Boy with Luv’ occupies the 10th spot clocking in the views in 11.8 days.

The band was off to a smashing start. Within the first hour of its release, the boys broke three records previously held by ‘Dynamite’. Their new song, ‘Butter’ officially had the biggest YouTube Premiere of all time, with 3.89 million viewers watching the song launch live. They also got the record for the fastest music video in YouTube history to hit 10 million views, a feat they achieved in just 13 minutes.

It also became the fastest music video in YouTube history to surpass 20 million views. They clocked in the views in just 54 minutes, much faster than the ‘Dynamite’ record of 1 hour and 14 minutes.

‘Butter’ also holds the record for the most views in 24 hours. The song managed to earn an impressive 113 million views within just a day.

This record comes in a day after the boys performed the track LIVE for the first time on the Billboard Music Awards stage. They are expected to kick off Good Morning America’s Summer Concert Series on May 28.