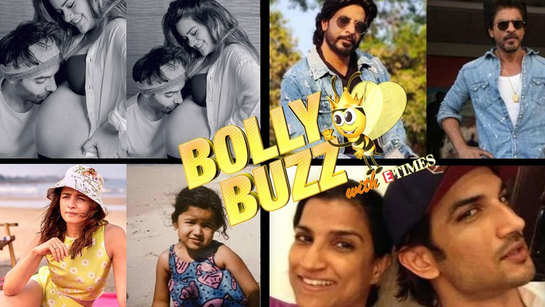 Yami Gautam took everyone by surprise after she tied the knot with director Aditya Dhar in an intimate wedding ceremony today. Sharing the news of her marriage, the actress revealed their first picture as man and wife. “With the blessings of our family, we have tied the knot in an intimate wedding ceremony today. As we embark on the journey of love and friendship, we seek all your blessings and good wishes. Love, Yami and Aditya” she further penned.

In the latest update on the drug case that emerged from the Sushant Singh Rajput death case, NCB officials have confirmed that Siddharth Pithani has been sent to 14-day judicial custody. Pithani’s arrest comes almost a year after Sushant’s untimely demise which is still being probed by multiple central agencies. Ahead of SSR’s death anniversary, the late actor’s sister Meetu Singh has warned fans about people collecting funds for all sorts of initiatives in the actor’s name. Claiming that these people were taking up these fundraisers for “personal benefits” she said, “the family has not authorised anyone to raise donations or funds in the name of SSR and no one has the consent to make anything about or related to SSR.” Meanwhile, the National Control Bureau will continue to examine all those close to the late actor once again in the drug case.

Anubhav Sinha recently came out in support of actor Kartik Aaryan after he lost out on multiple films. The filmmaker called the campaign against the actor “concerted “and tweeted, “And by the way… when Producers drop Actors or vice versa they don’t talk about it. It happens all the time. This campaign against Kartik Aryan seems concerted to me and very bloody unfair. I respect his quiet.”

On the other hand, Ayushmann Khuranna’s ‘Dream Girl’ co-star Rinku Singh Nikumbh passes away due to Covid-19. Rinku tested positive for the virus on May 25 and was isolating at home. However, her health detoriated soon and was later moved to the ICU as informed by her cousin Chanda Singh. The actress was last seen in the film ‘Hello Charlie’ alongside Aadar Jain and Jackie Shroff.

Aparshakti Khurana is going to be the new dad in B-Town. The actor shared the happy news of his wife Aakriti’s pregnancy with an adorable monochrome photo. “As we couldn’t expand the work during the lockdown, we decided to expand our family,” he penned in his caption that had fans and friends sending their love and best wishes.

After helping numerous distressed people during the pandemic, Superstar Salman Khan has now come to the rescue of the Movie Stunt Artistes Association. Teaming up with an organisation, Salman extended help to the stunt artistes registered under the association. Action director Aejaz Gulab said, saying, “Now, we are getting help from Salman Khan, and the money will be transferred into the accounts of our members… this is some relief for members who have been sitting at home without work”.

Tiger Shroff shared blooper videos from the sets of his action films while Alia Bhatt blessed feeds with her then and now pictures that prove her eternal love for a beach destination.

Shilpa Shetty Kundra cuts her birthday cake with paparazzi outside her...

Pooja Chopra: My mom is a gorgeous woman, who has moved...