GoNewsOn – Anytime Anywhere
Home Entertainment #BigInterview! Chandrachur Singh: I was supposed to work with Sushmita Sen years...
Share
Facebook
Twitter
Pinterest
WhatsApp
Linkedin
Rate this post
Chandrachur Singh might have been out of sight for a while but he certainly hasn’t been out of mind. The actor, who made a mark with films such as ‘Maachis’, ‘Tere Mere Sapne’ and ‘Josh’, returned from a self-imposed sabbatical to feature in a show where his co-star took the lead. But the actor has no qualms about it. He is happy in the space that he is in and now wants to try his hands at different characters. In ETimes’ #BigInterview, he speaks about what kept him away from showbiz for so long, a serendipitous encounter before he kicked off shoot of the web show, and why he is not yet on social media. Excerpts:

What kind of response are you getting for ‘Aarya’, which marks your comeback to showbiz?
I have got positive responses so far. I am based in Gurgaon so a lot of my industry friends called from Mumbai to congratulate me and appreciate my performance. Many offers have been coming in and I have been waiting to sign other projects. So, it has all been very good so far.

You didn’t mind letting Sushmita take centre stage, a thing that many actors are not comfortable with…
Actors should be happy and comfortable in the characters that they are playing. I sure did. ‘Aarya’ was basically a women-centric series. I was pretty comfortable in my skin. We worked as a team and got the best out of each other.

How did ‘Aarya’ happen?
I believe that this was all pre-ordained. So, it had been a long time since I had done a film or other projects. One day, I got a call from Ram Madhvani casting director; they were quite keen on having me on board. I was in Dehradun at the time but I recorded a small screen test and sent it across. Back then, they were yet to finalise the actor to play the central character of the show. Ram has done work of great consequence before and it appealed to my sensibilities. So I did want to work with him. 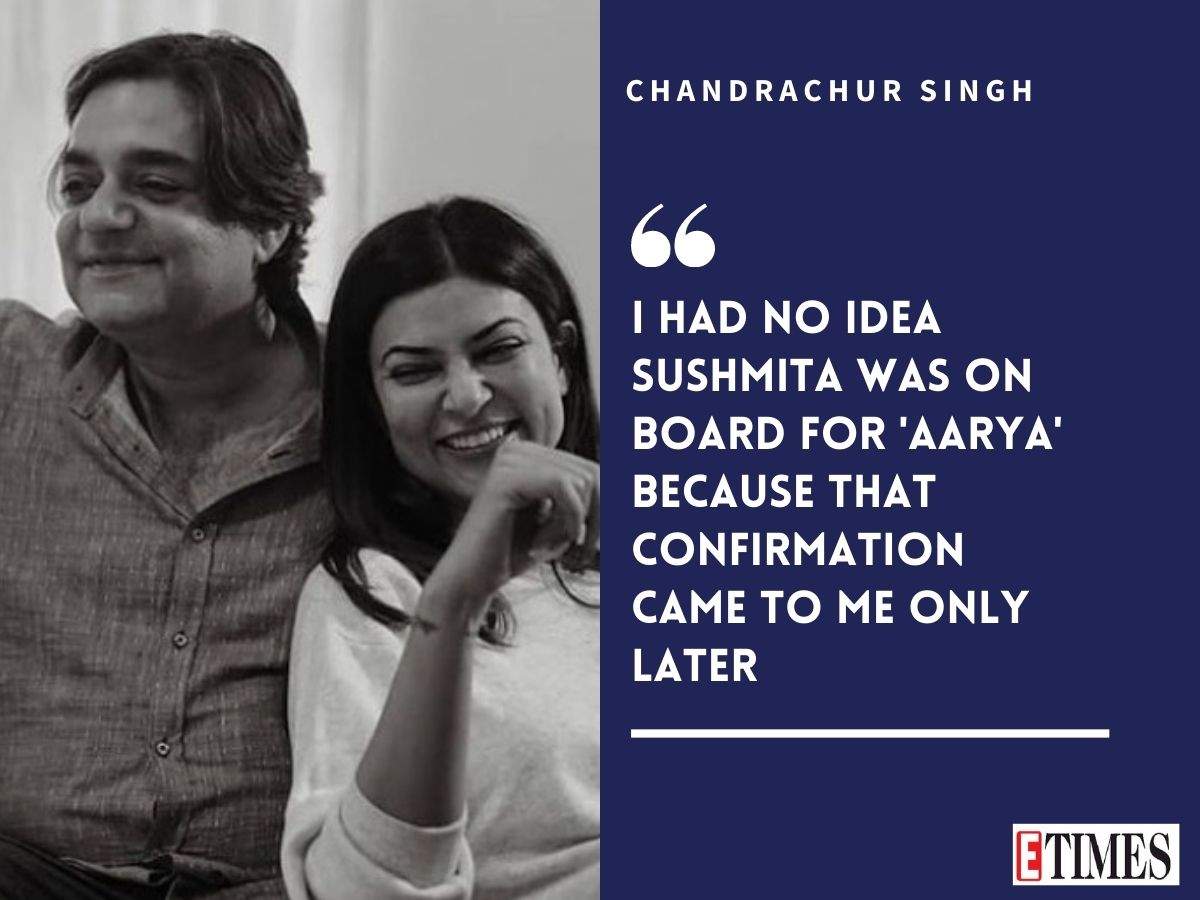 How was it working with Sushmita Sen?
I was supposed to work with Sushmita years ago but the project did not work out. When this show came my way, I had no idea that Sushmita was on board for the series because that confirmation had come to me from the team only later. Meanwhile, one day, when I was travelling to Mumbai, two air hostesses on the flight wanted to take a picture with me but the airline policy did not allow it. They asked if I could give them an autograph. I asked them their names for it and one of them was called Sushmita Sen. I have never known any other ‘Sushmita Sen’, so, I was quite amused (laughs). Then, from the airport, I went to the workshop where I met Ram and he told me he was taking me to meet Sushmita. I got goosebumps. Then that evening, I told them the story of how I met someone by the same name before coming here. That was really interesting! 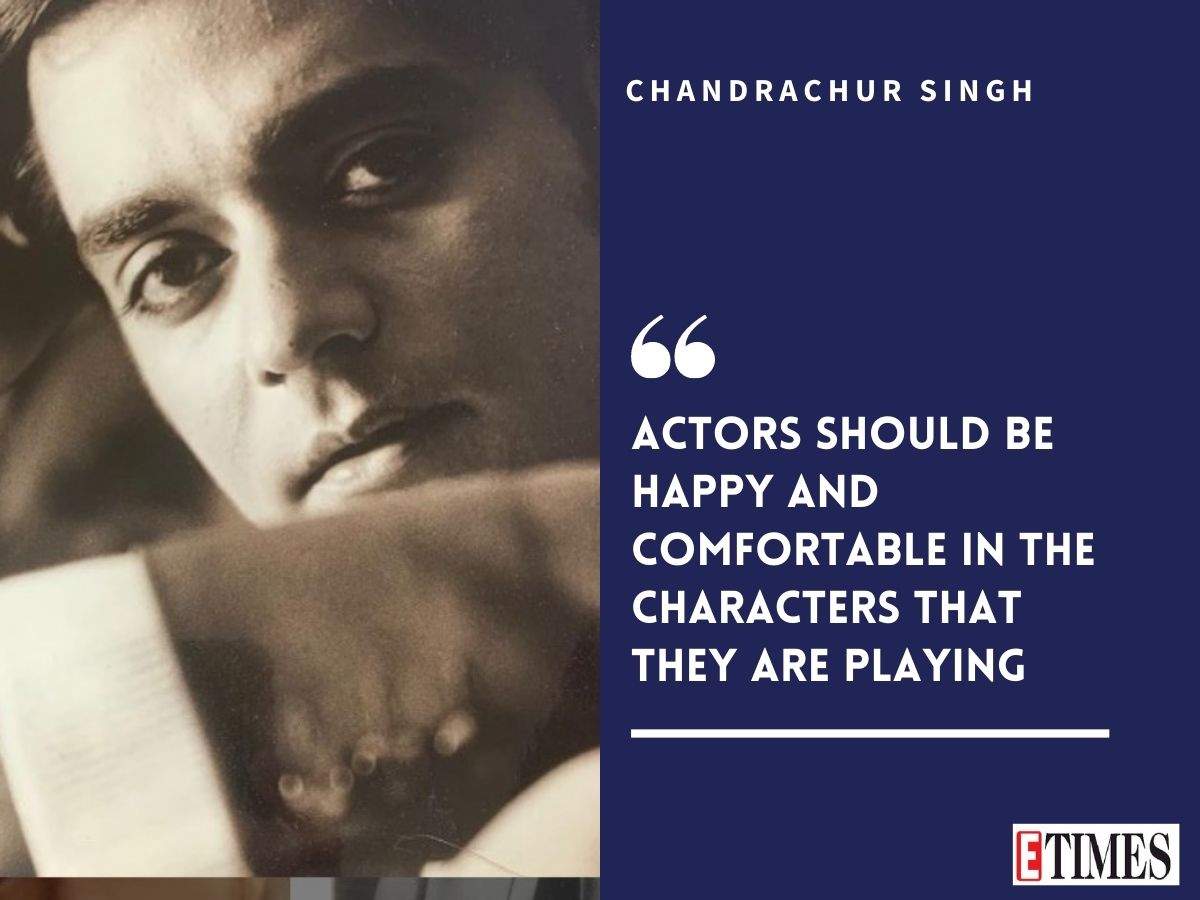 How different was it from shooting for a film?
It was a very interesting format of shooting. We had workshops where we broke the ice with all the other actors, but the method was quite different. Ram uses the 360-degree shooting technique, which is basically taking long sequences in one shot with the help of handheld cameras. It was a very unconventional method because it is not very commonly used. It kept all the actors on their toes. There was a lot of improvisation; we didn’t have dialogues. Whatever is necessary to be conveyed in the scene through the medium of the actors and the cameras were adhered to, without really sticking to organised scripting and dialogue. So it was a very exciting process! There wasn’t the worry of mugging up lines and we had the freedom to improvise. Overall, for me, it was a very new experience. I would love for more work to be done like this in the film arena because the style really amused me.

There is a surge of new content on OTT. How do you look at it as an actor?
There was spontaneity in ‘Aarya’ in terms of shooting it but the main thing is that when you look at the digital space, there is an adaptability quotient going on. I began my career with single-screen theatres and the transformation happened with multiplexes. Then in television, there was a big boom over the last two decades. People could smell a good film from far. The advent of OTT has made them available to everyone at home. Now, unfortunately, the Covid-19 pandemic has shut theatres down. Everyone has got into the habit of watching digital content; it is a natural transformation. All in all, the content has to be good. There is more interesting stuff for an actor to do now. 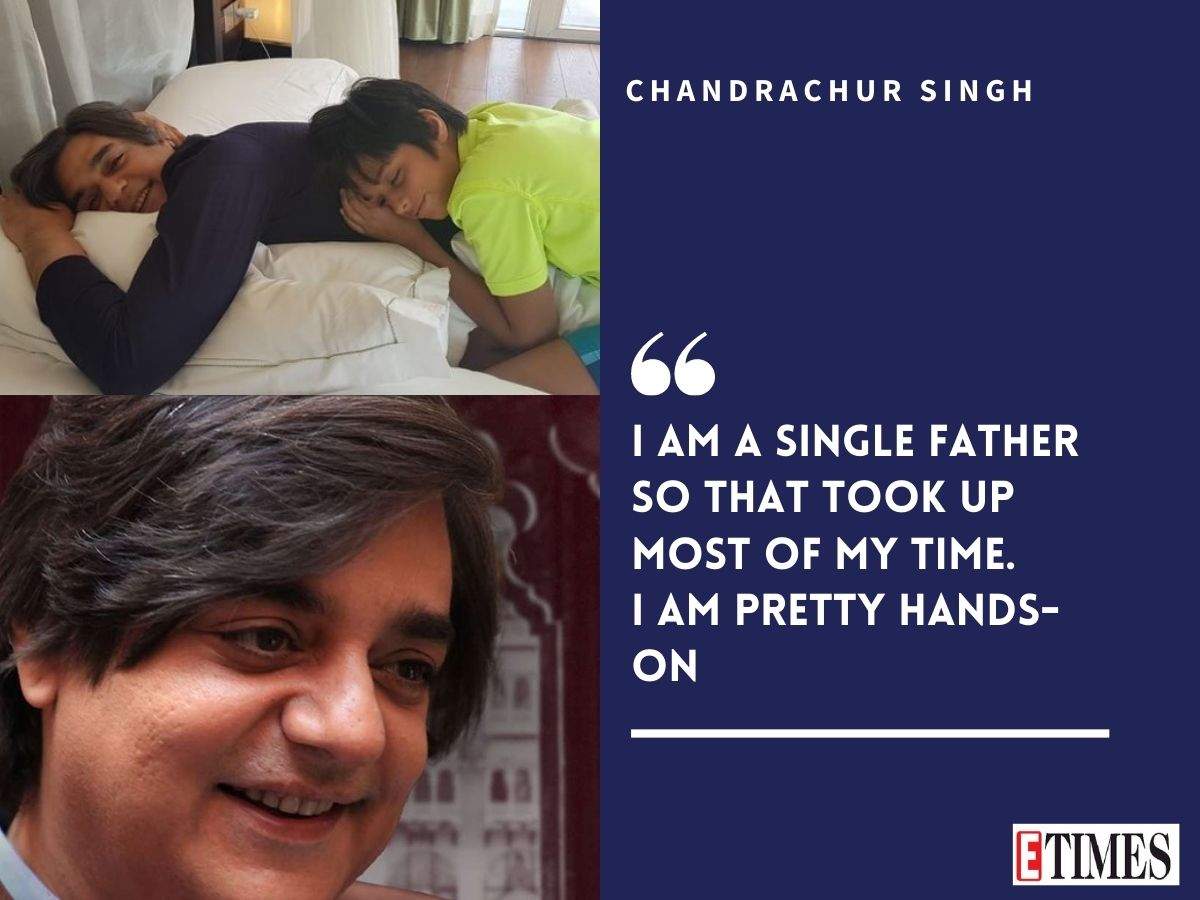 What have you been up to while you were away?
Actually, I am a single father so that took up most of my time. I am pretty hands-on; I needed to be. So I was occupied being a father for most of my time.

Your debut film, ‘Maachis’ will complete 25 years this October. How do you look back on your journey so far?
I am very happy looking back at it today. You get what you mean to get in life. It was great working with filmmakers with the class and standard of Gulzar sahab, Mansoor Khan, Kundan Shah, Ram Kanwar and so many others. It has been a fulfilling experience because the films have also hit bullseye so that really made me feel good.

Take us back to the time when you first decided that you want to make your career in showbiz…
I used to perform a bit in school and then I did theatre in college. It just happened without me being in Mumbai and meeting people. I had started a film in 1990, which stopped. Then I just wanted to do one film and even that took some years of struggle. The first film came to me through destiny, it was not planned and since then it has been a roller-coaster ride.

How do you deal with pressures, expectations, rejections, and failures?
It is difficult to deal with expectations because the audience wants to see more of you. It is more about visibility and not competition. I cannot do what Ranveer Singh is doing today. We are not in the same age bracket. So there are limitations. Even the Khans cannot play college-goers today. That is for the next generation and then another generation will come up. 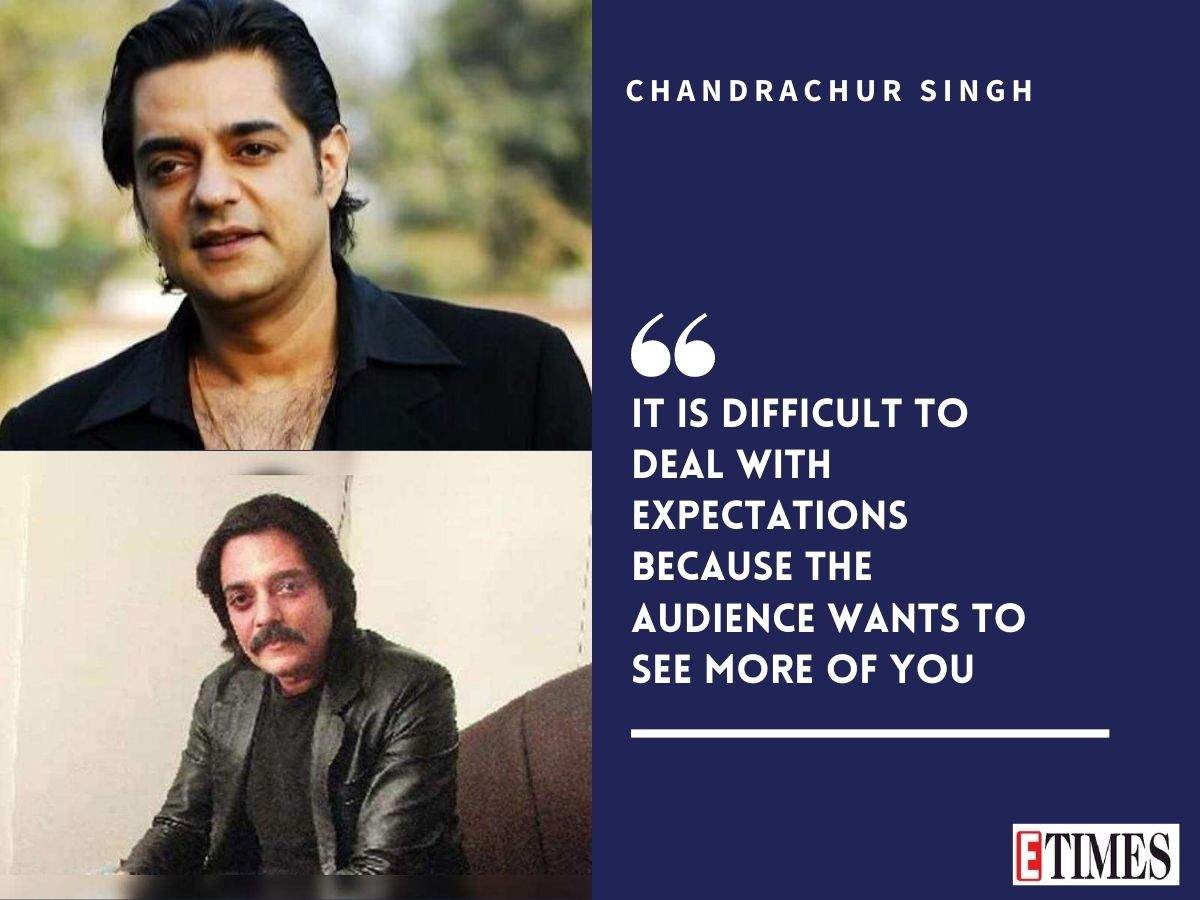 With the OTT platform and the variety of cinema being made now, there are a lot of opportunities for well-known faces and actors from the past. Everyone is in their own space. So many people have come and gone. This is the way it is supposed to be. Nothing is constant. So many had stayed on and have had a great body of work. Everybody has got their space because of the ample opportunities available today.

Why aren’t you active on social media?
I am actually not very skilled at handling social media. My son is going to teach me more about it. It is not my cup of tea so far but there will be a time when I will have much more work and I can then connect with the people about my work. Otherwise, I am not very media savvy.

We know Chandrachur Singh as an actor. How is he as a father?
I don’t know. I guess my son would be the best person to answer this question. I believe that I keep learning on the job. Parenting, I think, is one of the toughest jobs. You make mistakes, you have your good moments, you keep learning and try to become better.

Have you been watching movies?
I have been watching a lot of movies on the digital platform. I have not been to theatres in a long time. There is a lot of international stuff also that one gets to watch. I try to watch movies that are doing well or have got good reviews.

Do you think it is the end of movies releasing in theatres?
One can never know. Today, you can watch films on your mobile phones. So, it might look like the final destination until we come up with some new technology. Initially, there were normal prints, now they have become digital. So you can never know how technology might surprise you. 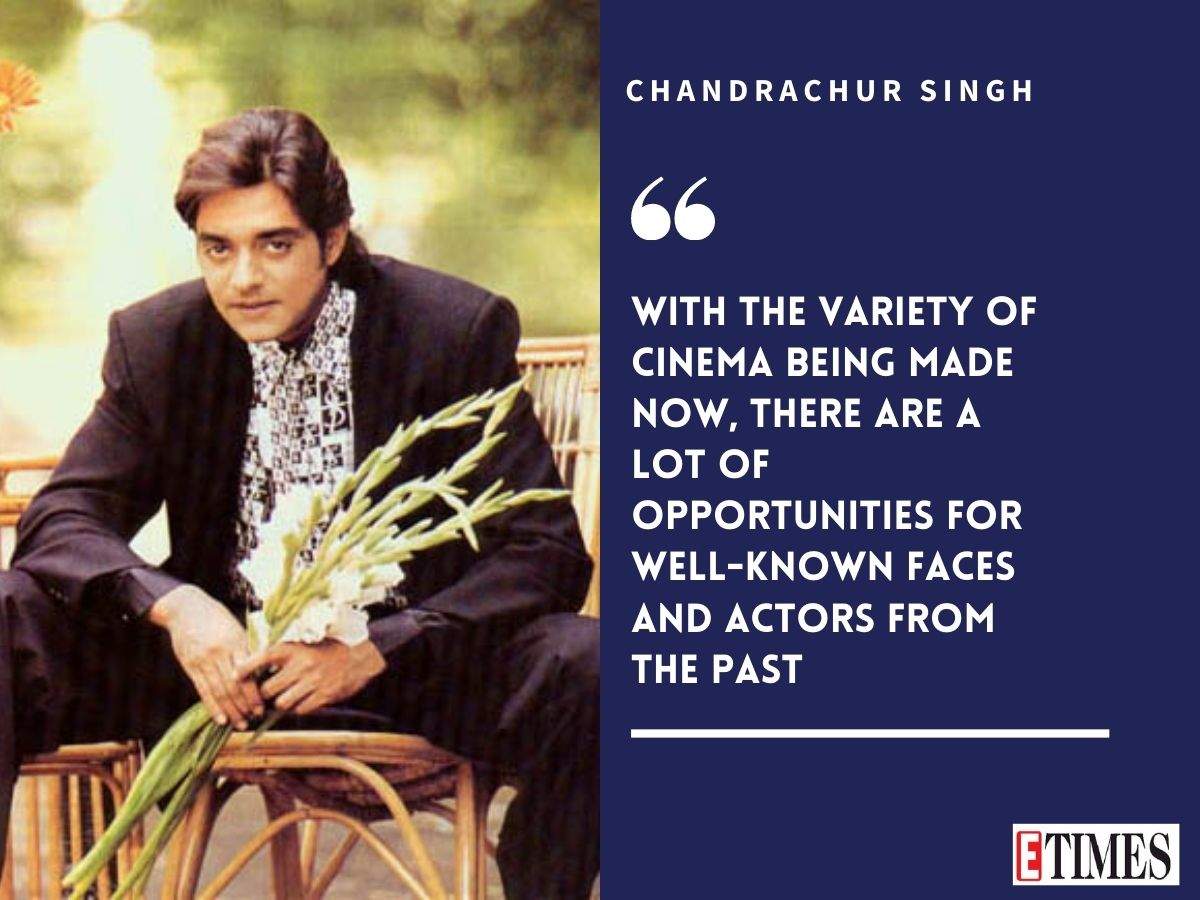 When was the first time that you saw yourself in the theatres…
I am very critical of my own work. I remember the reaction of the audience was pretty exciting. Actually, it got a very tethered response on Friday and we felt like we hadn’t hit the bullseye. But on Saturday, we went to Delhi to promote the film and we got some crazy response from the fans.

Losing actors like Rishi Kapoor, Irrfan Khan, and Sushant Singh Rajput must have been difficult…
It has been a very trying time for the world. In my own fraternity, there have been losses. Obviously, one is saddened. I just pray for everyone’s welfare. We need to be positive and stand together in these times and try and do the best we can wherever we are.

‘The Disciple’ director Chaitanya Tamhane: I am on my own artistic...