GoNewsOn – Anytime Anywhere
Home Entertainment Anushka Sharma is all praise for a woman who caught the ball...
Share
Facebook
Twitter
Pinterest
WhatsApp
Linkedin
Rate this post
Actress Anushka Sharma, who is currently in England with Virat Kohli and Vamika, has reacted to a video featuring a mother catching a ball with one hand while holding her baby. The new mommy in town took to Instagram and shared a screenshot of the video.

Recently, a video of a woman went viral on the internet where she was seen catching the ball at a baseball match with one hand while holding her son in another.

Sharing the picture on her Instagram story, the actress wrote, “Nothing we cannot do” followed by multiple emojis. Have a look: 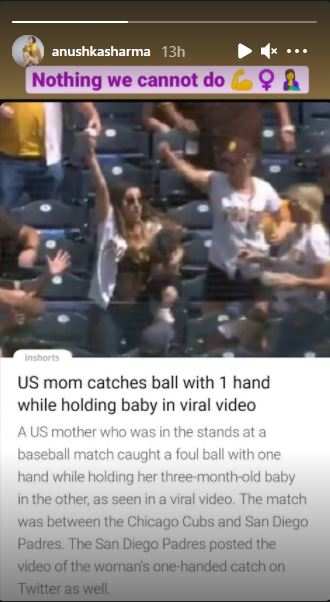 Anushka and Virat welcomed their daughter, Vamika in January this year. They keep sharing glimpses of their angel on social media. Soon after Vamika’s arrival, the couple requested the paparazzi to not click her pictures. But recently, the photographers clicked the star kid at the airport while they were leaving for World Test Championship Finals against New Zealand. Fans got to see blurred pictures of Vamika.

Recently, Virat hosted an ‘Ask Me Anything’ session on Instagram. One of the fans asked him, “What is the meaning of Vamika, how is she? Can we see a glimpse of her please?” To this, Virat had replied, “Vamika is another name for Goddess Durga. We have decided as a couple to not expose our child to social media before she has an understanding of what social media is and can make her own choice.”

Meanwhile, Anushka recently shared a happy picture from England while quarantining with Virat at a plush hotel inside the stadium. Dressed in casuals, the actress looked absolutely fresh and beautiful. But her hilarious caption which featured Virat caught everyone’s attention. She had written, “Don’t bring work home isn’t going to be applicable for Virat for sometime. 😋 #QuarantineAtTheStadium”

On the work front, Anushka was last seen in ‘Zero’ alongside Shah Rukh Khan and Katrina Kaif. She is yet to announce her next project.