GoNewsOn – Anytime Anywhere
Home Entertainment Anushka Sharma enjoys ‘English summer’ with husband Virat Kohli and daughter Vamika...
Share
Facebook
Twitter
Pinterest
WhatsApp
Linkedin
Rate this post
Anushka Sharma had recently taken off to England with husband Virat Kohli and daughter Vamika. The actress and her daughter are accompanying Virat Kohli for the World Test Championship. Giving fans a glimpse from a stadium in her Instagram stories, Anushka wrote, “That kind of English summer”. Previously, Anushka had shared a picture posing against the stadium during her quarantine days and captioned it, “Don’t bring work home isn’t going to be applicable for Virat for sometime.” 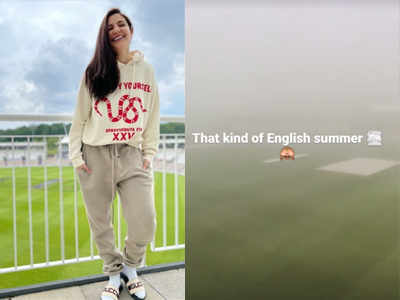 When the couple headed out of India, Anushka and Virat were snapped with daughter Vamika at the airport. . The ‘NH 10’ actress was seen carrying her baby girl in a chest baby carrier. Speaking about parenting, Virat had recently shared in a social media interaction that they have decided to not expose their child to social media before she has an understanding of what social media is. As parents, Virat and Anusha have decided to let their daughter make her own choice about social media.

Soon after the birth of Vamika in January this year, Anushka had introduced her to her followers. “We have lived together with love, presence and gratitude as a way of life but this little one, Vamika has taken it to a whole new level! Tears, laughter, worry, bliss – emotions that have been experienced in a span of minutes sometimes! Sleep is elusive but our hearts are SO full. Thanking you all for your wishes, prayers and good energy,” Anushka had shared on Instagram.

On the work front, Anushka has started shooting for her professional commitments. The actress was last seen in ‘Zero’ and is yet to announce her next movie. However, buzz suggests that Anushka Sharma will be seen in cricketer Jhulan Goswami’s biopic.