GoNewsOn – Anytime Anywhere
Home Entertainment Anand Ahuja shares a romantic post for Sonam Kapoor on her birthday:...
Share
Facebook
Twitter
Pinterest
WhatsApp
Linkedin
Rate this post
Anand Ahuja never misses any opportunity to shower love on his wife Sonam Kapoor. On her birthday today, he shared a romantic post for his lovely wife and it is sure to make you go awww! 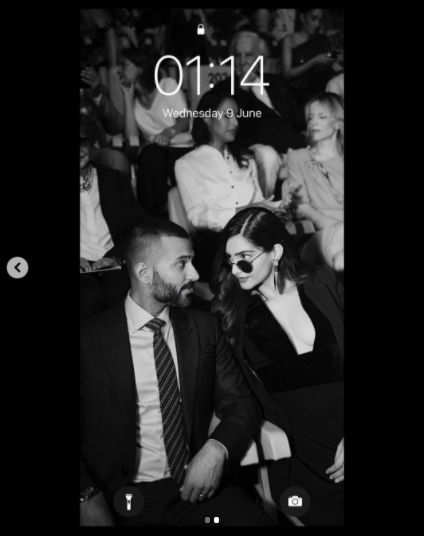 Anand took a screenshot of his phone wallpaper and shared it on his Instagram handle. Along with the picture he wrote, ‘I know how much you love wallpapers – well you’re the only wallpaper I need! Happy Birthday my forever wallpaper @sonamkapoor #EverydayPhenomenal’

In the monochrome photo, Sonam and Anand can be looking classy and stylish as ever. While Anand looks dashing in a suit, Sonam sizzles in a stylish pant suit with a brallete flaunting her plunging neckline and dark sunglasses.

Anil Kapoor also took a trip down memory lane as he shared some lovely childhood pictures of his daughter Sonam. He also penned a heartfelt note on the special day.


The throwback photos show some adorable moments of Anil and Sonam and it is simply endearing. Along with the lovely pictures, Anil wrote, ‘To the girl who chases her dreams and follows her heart… @sonamkapoor , watching you grow everyday has been a dream come true as a parent. I surely got lucky with the best kids. You’re strong when you need to be, kind without fail and always evolving. You have a way of infusing a bit of you in everything and it’s one of my favorite things about you. I’m so thankful that you and Anand are safe and healthy and we can’t wait to be with you again… Happy Birthday Sonam Beta! Love you and miss you!’

Sonam and Anil worked together for the first time in ‘Ek Ladki Ko Dekha Toh Aisa Laga’ where they played daughter and father. The coming-of-age film tells the story of Sweety Chaudhary, a closeted lesbian, and her attempts to come out to her conservative and traditional family. It also featured Rajkummar Rao, Juhi Chawla and Regina Cassandra in key roles.

Meanwhile, on the work front, Anil will next be seen in Sandeep Reddy Vanga’s next titled, ‘Animal’ which also stars Ranbir Kapoor in the lead role. It also features Bobby Deol and Parineeti Chopra in key roles. Apart from this, he also has Karan Johar’s magnum opus, ‘Takht’.

Sonam, on the other hand, will next be seen in Shoma Makhija’s crime thriller, ‘Blind’.

Who Is The Main Dancer Of Itzy?