GoNewsOn – Anytime Anywhere
Home Entertainment Amrita Rao’s dialogue ‘Jal lijiye, aap thak gaye honge’ from ‘Vivah’ goes...
Share
Facebook
Twitter
Pinterest
WhatsApp
Linkedin
Rate this post
Sooraj Barjatya’s film ‘Vivah’ starring Amrita Rao and Shahid Kapoor is still considered to be one of the best films in Bollywood. The film showcased the lives of two families and also mirrored the reality of society. While the film managed to leave an impact on the audience, Amrita’s dialogue from the film, ‘
Jal lijiye. Aap thak gaye honge’ has a separate fan base on social media.

Netizens have shared Amrita’s picture from the film and turned her dialogue into a viral meme. They have used it in the funniest way.

Check out what others have posted: 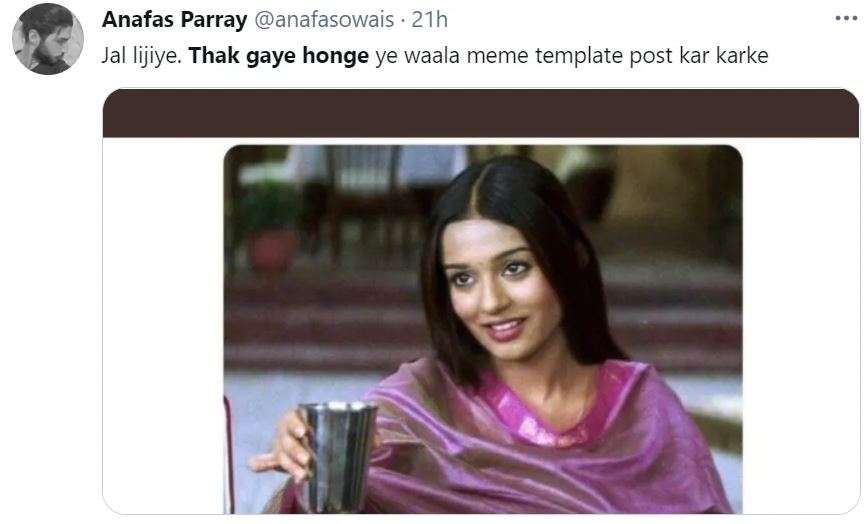 Meanwhile, on the personal front, Amrita welcomed a baby boy last year in November. She is often seen sharing adorable pictures and videos with her munchkin on social media. Recently in an interview with ETimes, Amrita spoke about keeping her son Veer away from the paparazzi. She had said, “Well, we have to strike a balance there just like everything else in life. For me, ensuring Veer’s privacy is important, but at the same time, there are so many expectations to be met with, especially of fans and friends from the media, whom we can’t just cut off; they are family. So, we have to strike a balance and Anmol also believes that. We’ll take our time to decide when we want to reveal Veer to the world. That way, perhaps, we can strike a balance.”