GoNewsOn – Anytime Anywhere
Home Entertainment After Aamir Khan and Kiran Rao announce divorce, Pooja Bhatt says ‘Nothing...
Share
Facebook
Twitter
Pinterest
WhatsApp
Linkedin
Rate this post
On Saturday, Aamir Khan and Kiran Rao announced their decision to get divorced after 15 years of marriage. They issued a joint statement and stated that they will co-parent their son, Azad Rao Khan. Now, Pooja Bhatt took to her Twitter handle to talk about ‘co-parenting’.

She tweeted, ”Most marriages end badly. The ones that don’t are looked upon as an anomaly. People understand and accept bitterness & hate more than they do largesse and compassion. Which is why most people rather live a lie than face the truth about themselves & a relationship they are in.”

She further added, ”Nothing new about co-parenting even after one decides to part ways as husband & wife. Relationships are not made/un-made on paper.They are written on one’s heart.Maintaining a relationship based on respect through & even after a marriage ends requires Integrity. Few manage that.” 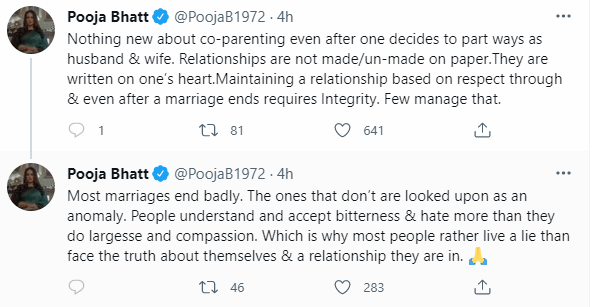 Kiran and Aamir met on the sets of ‘Lagaan’ where she worked as an assistant director. After spending some time together, the duo got married on December 28, 2005. Later, they welcomed their first son Azad through surrogacy in 2011. In 2016, they co-founded the Paani Foundation, a non-profit fighting against drought in the western state of Maharashtra.

He was earlier married to Reena Dutta but got divorced after 16 years of marriage in 2002. He has a daughter Ira and son Junaid from his first marriage with Reena.

Meanwhile, on the work front, he will be seen next in ‘Laal Singh Chadha’ co-starring Kareena Kapoor Khan. It is the official Hindi remake of the Tom Hanks-starrer ‘Forrest Gump’.