A viral post claim that the actor is on-board the film to play an “import role”. Although there is no confirmation from the actor or the ‘MI7’ film team, a report claims that the director Christopher McQuarrie confirmed that Prabhas has been roped in for the film.

The report further goes on to claim that Prabhas met the ‘MI7’ team while he was shooting in Italy for his upcoming pan-India film ‘Radhe Shyam’. McQuarrie reportedly narrated the script to the ‘Baahubali’ actor and he gave his nod to the same. 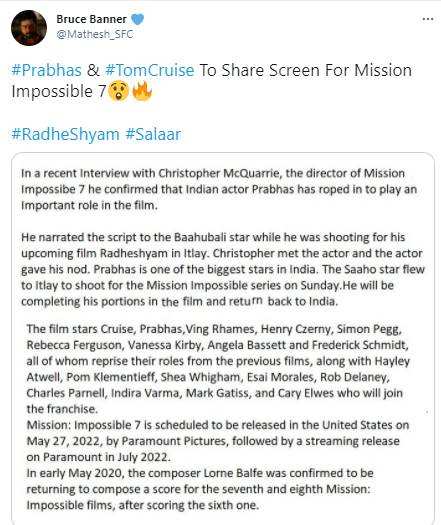 If there is any truth to these rumours, then Prabhas will join the long list of Indian stars who have gone international. Late last year, fellow south superstar Dhanush joined the cast of ‘The Gray Man’ starring Chris Evans and Ryan Gosling. Priyanka Chopra is set to star in Keanu Reeves’ ‘Matrix 4’, Ali Fazal will also be seen in the ensemble cast of ‘Death On The Nile’.

Sonam Kapoor blocks troll who asked how much she was paid...